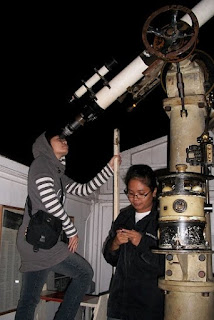 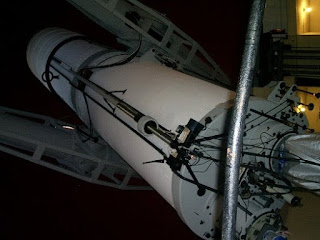 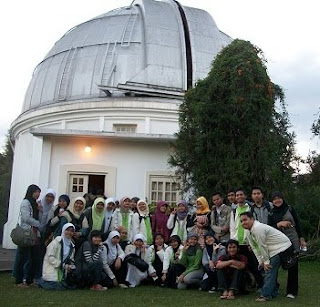 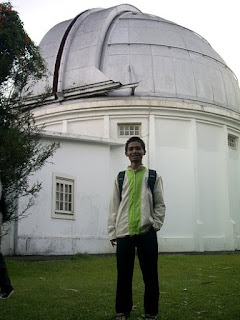 As I promised you, I'm now showing you the shots and sort of summary of my trip to Bosscha observatory. Bosscha was built in 1923 when we were colonized by Dutch. The Bosscha itself is the name of someone who back then owned the money for building this observatory. He was a Dutch but he didn't have any background in science or such. Till now, it seems the government of ours never plans to build the new one. I would say that, more or less Indonesian government barely ever made observatory as we are only proud of having this only one observatory which is the legacy of colonization era.


I and some friends of mine arrived at the site at around 5 pm. We all 36 members of MEC headed up this place as it was our routine program to hang out. We pretty much learn English and learn anything around us. The first thing we visited there was the park and we sat there gathering to kick off the agenda. Having had the short opening, we then went to the biggest cupola where Zeiss telescope located. Someone explained us quite much about it, we felt quite difficult to understand his explanation though.

Soon the adzan maghrib resounded. Some of us headed to the praying room. We were quite in trouble since there only small room there. Besides, the ablution room was not quite representative either. I didn't want to complain about all things there, but it seems the management or our government needs to give more attention to mend the facilities and everything. I hope it will be getting improved soon.

The next thing we did was to listen up to someone's explanation about Bosscha's history and and astronomy. We were seated in a room accommodating around 100 persons. Subsequently we explored moon and Saturn by using other smaller telescopes. We were not able to use the Zeiss as it was being used for research, a guy said. To use the telescopes, we stood in line as other schools of people also wanted to try them. I met some guys from Solo and Palembang then.

Having done all of them, we then shopped some stuffs. I myself bought a miniature for sister of mine. Hope she'll like it. Some of us groped rupiahs to buy key tag, sticker, miniature and others.

The last thing we did before leaving was to snap some pictures. We of course didn't want to miss every corner there so we posed ourselves at almost all parts of the site, not that much though.

A thing that I could take from the trip, regardless to the facility drawbacks, coldness, unclear explanation or anything is that I must thank God more. I do realize that I am nothing and this world is nothing either compared to the gigantic and unknown universe. We do only know a little thing of anything. God knows all things.
Alhamdulillah I so much liked this trip. It is comparable to the trip I had in Mt. Lemon Kit Peak – Steward observatory.

Hope I can visit other observatories, any suggestion?