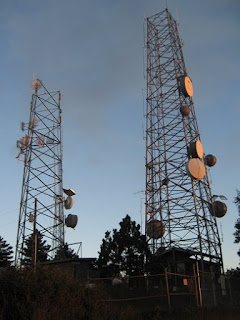 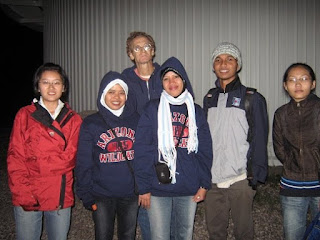 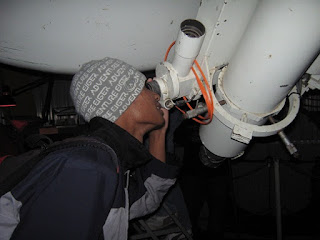 Salam,
Here are some shots taken at Steward Observatory, Kit Peak Arizona in 2008. I and some friends of mine went there with our professor to gaze at the stars and other celestial bodies by using telescopes. At that time we were scores of students of English as Second Language at University of Arizona. Luckily we got a chance to study Astronomy as the bridge or addition class. The professor's name is Don McCarthy and I very much loved his way in teaching us. He was indeed really creative and friendly, discipline and punctual. I barely have ever found such professor like him here. He didn't just teach us well in class, but he sometimes brought us to the real thing that we studied at class – observatory like what I'm showing you here.

Well, I'm writing this as I've got a plan to visit an Observatory here in my city (tomorrow). I live in the city of Bandung - Indonesia and fortunately this town also does have an observatory, it is called Boscha Observatory. This is situated in the north Bandung and can be reached by car for about 50 minutes from the center of Bandung. Or if your are from Jakarta, it needs probably 3 hours to get there. So this piece of writing is kind of comparison between those two observatories. What I'll tell you in the paragraphs up next is about the Steward one as I haven't visited the Boscha. You'll be able to read my note about Boscha few days to come. It is kind of abashing as I never went to viewpoint in my city though.

The Steward Observatory can be reached for about 2 hours from the city of Tucson Arizona. This building belongs to NASA (if I am not wrong) and it is used for the research of University of Arizona's students and lecturers. There was also one or two belongs to South Korean government, the professor told me so. It was my remarkably nice experience to get this chance as not all Indonesian students could go there. We were 14 Indonesians but only 4 of us went there. Actually only 2 persons from those four who were students at Astronomy class. We kind of begged our teacher so he let us 4 in the trip.

We spent about 5 hours in the area – exploring the sites, taking pictures and videos, chatting, and of course observing the night sky. This site is in the high level so that the weather was so really cold. Some of us wore thick Jacket, socks and mantle. Thing that was quite surprising was that, the professor let us operate the telescope by using computer. I did make some clicks so that I could direct the telescope to find any celestial bodies as I wished.

We were then in Ramadan so that we got our ifthar there, too. Thankfully I brought some foods to eat. We had dinner together with some non-Muslims too. The sunset view was so much picturesque that we dream to be there again someday, insha Allah.

I hardly can wait any longer to see the observatory here in this city. I'm going there tomorrow with school of friends from MEC. I promise to post the writing about Boscha, too Insha Allah.