Brunei's Economy (to my knowledge)

Today, 11 Ph.D students from SBE UBD (including myself) attended an event tiled "The Economic Blueprint of Brunei Darussalam: Looking Ahead" at Radisson Hotel, Bandar Seri Begawan. For me, it was the first seminar-like event I attended in Brunei. The main speaker of the event was Yang Berhormat Dato Seri Setia Dr Awang Haji Mohd Amin Liew bin Abdullah, CFA (a minister at the Prime Minister's Office and Minister of Finance and Economy II). Since I am new to the Brunei's economy, so was little bit curious about Brunei's economy and I noted some important points from the event as follows. 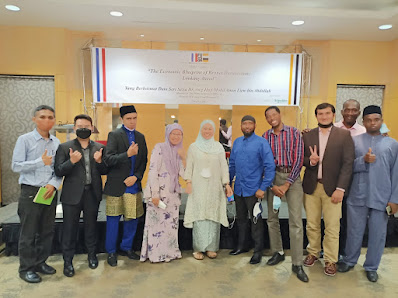 First, Brunei Government has been struggling to diversify its economy, meaning that it does not want its GDP to be dominated by oil and gasses anymore. Some efforts have been made, such as creating policies to support government and private sectors in food, tourism, and ICT industries. However, boosting private sectors with small number of population is rather challenging. Thus, finding overseas market (export) is definitely the right choice to take. In addition, Brunei has also taken several steps to be less dependent on other nations considering the world is getting more fragile (such as caused by the Covid-19). For instance, Brunei government has built its fertilizer company, named, Brunei Fertiliser Company (BFI) which produces urea and others fertilizers for fulfilling the need of local needs and exports.

Second, the speaker shared us several problems of Brunei, which are the homework awaiting for the solutions. The first problem deals with most of Bruneian's mindset for always depending on the government. Yes, it is nice to have many goods or services in Brunei subsidized by the government, such as petrol (gasoline) and housing. Yet, this may have created people's mindset to always be in the comfort zone. The second problem is related to the capital outflow that is happening due to the increasing interest rates in UK and the US (due to inflation). Amidst the effort of increasing foreign direct investment for supporting the economy, this capital outflow is a serious issue, especially for a tiny country like Brunei.

As any other country in the world, Brunei is facing its unique economic problems that need to be solved. Once it has been striken by Covid-19, but it was successful to tackle it. Other issues outlined above should be addressed and solved properly by government, private institutions, academia, and all parties. To my knowledge, I am quite certain that those issues can be solved, God willing!

Islamic fintech firms started to flourish in Indonesia. Today, I checked the website of the Islamic fintech association, and there are 39 members registered there (source: https://fintechsyariah.id). In addition to researching Islamic fintech, I personally attempted to be a part of this new movement by investing some money in one of the Islamic fintech P2P firms. My primary motivation was not to earn a return; instead, I just needed to figure out how they operate and serve the customers. Here in this writing, I will share a bit of my experience and viewpoint about Islamic fintech firms. This writing might possess my subjective opinion. I am not going to mention the company's name anyway.

In March 2021, I invested some money in an Islamic fintech firm to fund a project using musyarakah contract. The advertisement for the project was excellent, attracting me to take part and surely other investors. I saw many projects on that website were easily to get funded. The required findings were quickly funded by the investors. It was a good sign, wasn't it? The project I was involved in was expected to last for 6 months. I thought that my cash would recover at the end of September 2021. However, the project seemed to face problems. The company obtaining the fund didn't finish its project on time. Thus, this firm hadn't payback the fund to the Islamic fintech firm distributing investors' cash. Now is April 2022, and the investors' money has not been paid. So, it has been more than a year.

From this experience that I have, I believe the first challenge that Islamic fintech firms face is related to the repayment of investors' money. Although the contract was musyarakah, in which investors also bear the risks that might appear, some measures must be taken to safeguard investors' money. Islamic banks seem to have a better approach in this regard. Thus, Islamic fintech firms may need to learn from Islamic banks to operate better, primarily in repaying the investors. The second challenge that I predict is related to the diversification of investors. Since each project is quickly funded, I doubt that the money comes from individual investors (the real peer-to-peer lending mechanism). A large portion of individual investors would be better, showing the inclusiveness of these Islamic fintech firms. I assume that the most money pouring projects in Islamic fintech platforms comes from large institutional investors, perhaps banking and the like. Thus, the inclusiveness of these Islamic fintech firms is still questionable. However, I cannot support this argument since no data is available regarding the investor portion. Arguably, some empirical research can be done to explore this issue.

Many thanks to all participants who have joined the Mendeley Workshop, held on May 10, 2021. 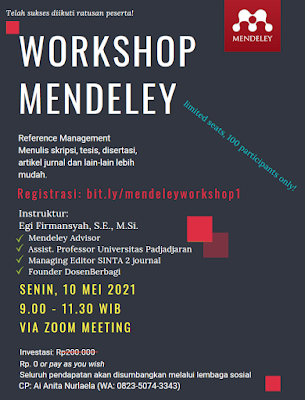 Special thanks to the kindhearted participants who have made donations for the social causes through this event. The followings are transfer record and receipt from LAZISSU (http://lazissu.com), a charity-fund management organization in South Bandung which will distribute the collected fund for orphans in Cangkuang Wetan, Dayeuhkolot, Bandung.

The recorded video can be accessed via the following Google Drive link:

Here are some screenshots of the event: 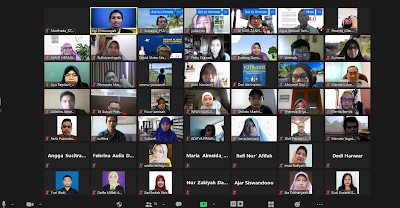 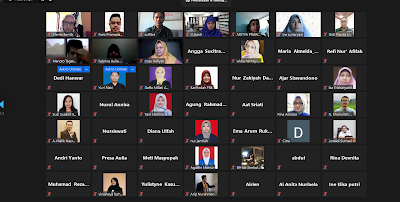 Here is the link to slides that we used:

Here is one of the videos on how to use get SCOPUS API Key for Publish or Perish Software:

There are various instruments where we can put our money in. Some people prefer to save their money at the banks while some prefer to invest their funds in stocks. Either way is just okay. However, as the technology advances, we presently have a new way of investing our money. We can now buy bitcoin or other digital investment opportunities.
I personally just tried buying a contract at a financial technology firm, called Ethis. This is an Islamic financial technology company based in Singapore offering both funding and investment opportunities. If your company needs financing, you may apply to this firm. Go to their website (https://www.ethis.co.id) any try.
My motivation of trying to invest in fintech firm, in addition to getting some returns, is to know their business model. Now, I know how to be the investor at fintech firm. Frankly, it is not hard but it's quite procedural. First, I had to register in their website by filling the form and uploading ID card and so on. Then, they would verify my identity. Having obtained verification, I could then select any project to invest in. The project ranges from commercial property and business offices or buildings. As Ethis follows Islamic rule, so the projects are surely sharia compliant.
After selecting a project and mentioning the amount of money we are willing to pour in, they prepared some documents for me to be read and signed. They use digital signature mechanism and this is quite plus point anyway. This process took 2-3 days, if I am not mistaken.
It didn't take long time for me to read and sign the documents (contracts). Having signed them all, I had to wait some time for getting the bank virtual account where I would transfer my money. Since I selected BNI bank when registering, they emailed me the BNI virtual account so I didn't have to pay for the administration fee.
Well, what is the impression of investing in fintech? To me, it is quite a bit challenging since the process took quite some time and different from buying stocks. Maybe I will feel more comfortable if I invest for the second or third time. I may also consider investing at other fintech firms because there many companies that we can choose from the list of OJK (financial service authority).
So, how about you, do you have any desire to start investing in fintech firm?
Posted by Egi Arvian F at 10:22 AM No comments: