On Friday, May 15, 2010 I went to Landmark building at Braga street Bandung. The pretty big and hilarious expo was held there. There were ample books and other stuffs we could grab. The thing that somewhat unusual for me was that the presence of hand phone booth. The fair was actually a book fair, but why did the electronic stuff such as cell phone exist? Actually the boot sold two kinds of cellular phones (for some reasons I cannot mention the brand) which more or less are appropriate to be called Islamic phones as they have Islamic contents bundled with them. The contents are Al Quran, hadith, muratal, adzan and so on. We can get all those software for at no cost – giveaway. I don’t know exactly the price as well as the complete feature of these phones as I just took a glance look at the booth. Curious about these phones? They are worth it to own.

At first, I didn’t actually want to go to the fair as I didn’t make any plan to buy any book within this month. It was just a friend of mine who urged me to go there. He told me that there was a big sale for most of the books sold. Besides, that day was the last day of the fair. These two things became my motivation to head off and get the book I wanted to own. I just then suddenly decided by myself that I needed to buy it there.

The thing I eagerly wanted to buy was that Sirah Nabawiyah book - the book of Prophet Muhammad’s story from his birth until his decease. That friend told me by a text that the price was just IDR 60.000 (around $ 7). Compared to the regular price, it was definitely a lot cheaper as I had to grope in to my pocket for IDR 300.000 (around $33) if I bought it not in the book fair. This book was written by Muhammad Ridha, an incredible Egyptian who dedicated himself to find and collect scattered stories or manuscripts of Propthet Muhammad (pbuh) from hadith, books and other trusteed as well as verified sources. Muhammad Ridho spent many years to write this 950 pages book so that I am pretty much sure that this book is really apt for me to learn and know more about our Prophet. It had been quite a while I wanted to buy sirah book as I was sure I knew nothing about my Prophet but a little, a very little. Hope I can get much knowledge then.

Back to the book fair, the situation inside the Landmark building was quite noisy as many people came there. Several sounds sounded by either persons or audio device from each booth, urging people take a look and buy. As I had already intention to buy the book I wanted, I just directly search for sirah nabawiyah as I mentioned above. Thanks God I didn’t find any difficulty to find it, the stock was actually not really plenty so I was somewhat worried if no one left. Aside from buying this book, I also bought 1 kilogram honey for a friend of mine. It was IRD 60.000 and kept in a small plastic gallon.

After buying those two things I thought I had better not go home right away. Instead, I did sightseeing and subsequently was interested in watching the talk show held by the committee of the book fair. In this talk show I there were two speakers presented, a colonel, retired armed service officer and an ustadz (Islamic preacher) from Hizbut Tahir Indonesia (HTI). They discussed about HTI’s stance of rejecting Obama from coming to Indonesia. As planned, Obama, the US president are going to come to Indonesia in June or July. I got many insights ‘bout this thing, won’t share them here though.

Hm….I was quite happy that day, quite satisfied too as I bring home the book I pretty much wanted. But one thing I’d like to share with you as the dessert is that, I barely could find comfort to pray inside the building. I mean the praying room of Landmark building is not really appropriate, especially the wudlu place (ablution). It’s just not really apt for the building as big as Landmark to have small, dirty and noisy praying room (not a room, it’s a veranda at the second floor anyway). So I think the management has to start thinking about improving praying room as well as ablution facility as many of the comers are Muslims. It’s not just Islamic book fair usually held there, but also computer fair. No reason for not improving it….

MEC's Milad, MEC and Me 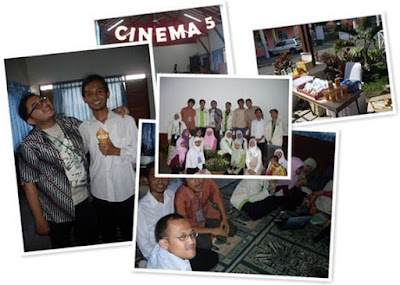 Posted by Egi Arvian F at 1:50 PM No comments: Links to this post

Readers, two days ago (May 1) was the international labor's day and I didn't very much celebrate it. It's nice to have this day though it's not a legally holiday in most countries. The USA is actually has its national labor commemorated on the first Monday of September. I still remember it as I bought my Acer laptop on this day – September 2, 2008. Ah....so memorable :). In Indonesia, many people rallied on this day especially workers who strive for the better labor affairs including salary raise, eradication of outsourcing, contract improvement etc. I read somewhere that on May 1, 2010, more than thousands people went to Jakarta, marching from “Bunderan HI” to “Istana Merdeka”. They came from many cities mostly in Java island – Bandung, Jogjakarta, Surabaya, Tangerang and vicinity to fight for their aspirations. This labor case has tons of problems that haven't been able to be solved yet.

The things they strive for are actually rare to meet the realization. I know that it's not really fair for workers in this country in terms of salary and others. Every country also faces the same problem though. America and Japan are two biggest economies in the world but they they still have some issues related to the labor matter, it's much better than in our country though. As an information, one of my house family in Arizona told me that the salary at Walmart is $7 per hour. So when someone works there for 5 hours per day, daily, she or he earns $35 and it's actually much higher than most jobs in Indonesia. But wait, my house family said that it's way too small still, they told me that it's still the form of labor exploitation so that they didn't buy any goods from Walmart. They prefer to shop at Fry's or else. Well, for sure I didn't tell them the salary of workers in Indonesia as it was not at all worthwhile to be compared.

Thing that seems to to biggest issue in labor affairs in this country is that the unfairness for the workers. Especially those who are in the low income field of jobs. Those who are in the high level job are actually enjoying the low rate of rupiah compared to US dollar. The low rate cost of living in this country is also kind of bless for them. Who are they? Sure the expats and those who work for international companies. Should we blame for them? Of course not. It's just the unfairness that is portrayed by this kind of thing.

I am hoping the situation will be getting better very soon. Government needs to work harder and (cleaner) to take care of and grant this labor demands. Corruption is such a totally spooky thing that hampers the development of this country. This evil action is thriving in almost all aspects of life in this nation. It seems a common thing to do corruption here, it's fact ladies and gentlemen. I experienced few weeks ago in two institutions, the officers did it before me. I don't want to tell you the name of them though. Well, it is still the number one problem problem that we have to completely demolish. PERC (Political & Economic Risk Consultancy) Hongkong stated that Indonesia is the most #1 corrupt country among 16 Asian Pacific countries which were surveyed. This institution surveyed 2,174 businessmen who would like to do investment overseas. And you know, those surveyed people voted Indonesia as the most corrupt one, what a shameful thing. For more info, you may read this thing on at http://nusantaranews.wordpress.com/2010/03/09/prestasi-terus-naik-indonesia-negara-terkorup-asia-2010/

Well, It's no use condemning this thing bad thing. Once I have ever thought, should I move to another country? Or should I change my nationality? Ah...what a loser if I did. I just want to refine this country by doing things that I can do. I know it's way hard to do that, but if we just kept silent or condemning it, it won't come to any fruition. Being a small business owner might be the better solution for us to earn much more earnings. At the same time, we'll able to create job opportunities for many people. In short, whatever you are, let's be an entrepreneur!

Just keep working hard, be sincere with all of heart and soul. Insya Allah.

*This post hasn't been thoroughly edited. Sorry if you find any mistakes either in grammar or the content.