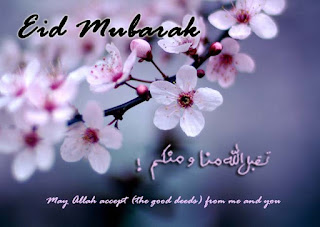 A difference or diversity is bless from Allah. It is not us who makes it, Allah does it instead. We were created in many posture shapes, religions, backgrounds and anything so it is just fine to face dissimilarity in our lives. Yet, a quite hot thing happened recently was the difference in precise day of doing the Eid prayer. Some Muslims did it on Friday and some of on Thursday (or maybe on none of those days for some others). This difference pretty much happens as the standard used by all Muslim sects in Indonesia is somewhat dissimilar. Though the standard may be the same, but the measure is often the case different among them. Muhammadiyah and Nahdatul Ulama are the two biggest Islamic organizations in this country in which they usually have different time in determining the precise day of any Islamic day. I see this as a normal thing though, as I mentioned above, difference is one of Allah's blesses as He makes it for us to take lesson.

I and my family in hometown of mine had Eid commemoration on Friday, September 10, 2010 so that we got the even number of our Ramadan fasting – 30 days. We performed the prayer at Al Hasanah mosque and all of us went there by foot. The distance is not that far from our house so we just needed about 3 minutes to get there. The mosque was filled up with around 700 Muslims just from our RW (Rukum Warga, it's hard to explain in English). Most of them were native Cisewuans and some were the comers from other towns who marry our people here. Something that caught my attention then was the speech delivered by the khatib (speech person) in which I at all was not familiar with. He's the chief of KUA (Religion Affairs Office) and at that time he talked about the essence of Ramadan as well as the Eid.

In Ramadan we learn many things. From sahur and iftahr we learn discipline and the importance of punctuality. From zakat we learn how to share with others, from shaum itself we learn how to feel what the needy or the starving people feel. From taraweeh we learn night prayer which is very good to apply. Indeed, there are many things we could learn from Ramadan. The essence is, we have to be able to be bettering ourselves from those learning. Those who have endured training will have more power, skill and capability of becoming better people.

Subhanallah...all's recorded.
Yupz, knowledge is very quick as a flash! Unless it's recorded, it just goes away...