Indeed, I am not Good at Drawing 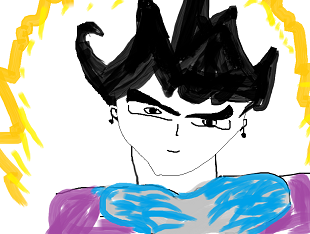 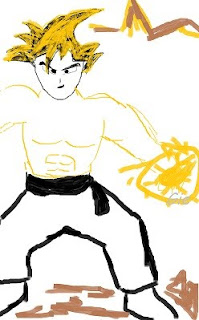 You must be snickering seeing these shots. Who do you think the painter is? A kid at primary school? Or kindergarten student? Yeah you may say that. I also do know that nowadays children at their ages are quite imaginative and creative to create such pictures. These pictures can be way too easy for them. But,
VIOLA!!!!!!!!!!

It's me who made them, readers. Yeah, I drew it using software at Windows seven professional called paint. This version of paint is much better than the formers available on Windows XP and Vista. I am quite sure if those who are capable of making a good drawing in the prior version of paint try this new one, they will be amazed. It's so easy and nice. Besides it has much more features that allow us to create almost anything. I can't do much though.

So, go back to the picture. Can anyone guess who are them? Cartoon characters? You are right. They are characters in cartoon movie – Dragon Ball. His name is Goku(beside), at least he is the one that I meant in this drawing. If you are able to guess him, that means my painting isn't really bad, is it? I made it haha.. One thing that I like from this cartoon character is that the character above (Begita), he is quite selfish and wicked in the beginning but then he repents and changes to be a good character. He is not the main figure anyways. At the end he helps the first character (Goku) to conquer the crooks and culprits who want to destroy the world and universe. Ah...I'm not gonna tell you the whole story here... :)

Well, drawing using computer can be done quite easily by using several software, either freeware or not. I myself prefer to use the freeware as I think it's more than enough for me do materialize everything I have on my mind. Non-freeware software for images or vector such as Corel and photoshop are available for paid. I used to use them in the past. But now I always use freeware such as Inkscape, google picassa and of course paint. As I said, paint in windows seven is really awesome. You've gotta try it. I myself plan to use and explore it more often. Hope I can create a lot better masterpiece, for I want to post it on my blog, hopefully. Enjoy the pictures :)