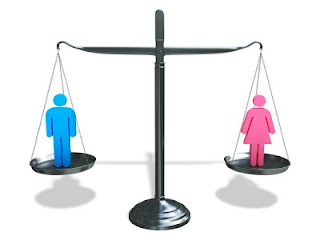 This is the closest I had been to the so-called gender equality. Yeah it was when I did research about role of woman, before, after and during the disaster. I did this research was not because of my real interest in the woman study or because of class project. I used to be really ignorant to this particular study. I didn't hate it though. I just somehow couldn't really stand and focus on this. It is because I had no adequate experience in digging all things related to woman. Instead, I did this research because one of my lecturers offered me to help her doing this research, though I've graduated, we still have good relationship so that we sometimes contact to each other. She told me that this research was aimed to unveil the situation of Indonesian women before, during and after disasters which pretty much happen. The result of this detailed examination would be presented by my lecture and her team in front of Oxfam Great Britain. Oxfam is an NGO working on the field of social to enforce equality and eradicate poverty around the globe. You may get on the following site for more details about it: www.oxfam.org.

The first thing I had on my mind when I got this research was a question, said “will I be able to do this?” My answer then was, ”no”, I am not capable of doing this”. I then offered a friend of mine who has quite similar background to me to take over my job. Thankfully he said “yes”. Due to the thing that I can't explain here, that friend of mine then changed his decision few days after he agreed to do it. He then offered me back to do that research. Phew....I indeed had no choice – I accepted it as no one would do. I had no time to find others.

Having received all files and materials he had collected from net and the lecture of mine, I then tried to thoroughly read and figure out all of them. As I said before, I didn't have at all background as well as interest in this field of study. As time went by, I started to find a spot that I liked quite strong, not really strong though. Yeah, it was “the struggle”. At that time, I at all was not really interested in the gender equality or something attached to it. I just highlighted the struggle and strive that women do to gain something they really desire. Yet, I haven't been able to voice my personal valuation on it.

I read many articles on internet about role of woman in Padang and West Java. In these two areas, disaster happened quite often. Aceh actually experienced the worst disaster ever within this century - Tsunami, but I didn't take it into examination as this calamity happened in 2004. The period of the sample research must be between 2005 – 2009. Aside from reading the article, I also phoned a woman working as an NGO worker namely “Fatwa” in Padang. I explored her experience as CEO of Kogami, the NGO working to deliver message to Padang people that they are indeed in 'dangerous'. This organization gives training, mitigation, earthquake drill etc to the Padang people. The city of Padang is located near the sea and its structure of geology has high possibility for the earthquake or tsunami to occur. Let's pray may it won't happen...

Padang has more plus in terms of women participation. I compared the role of women in Padang and West Java and I found that women I in most part in West Java had less role than those in Padang. I then questioned myself, “is it because of matrilineal that prevailed in Padang or what?” Yeah, from the sources I got, most women in Padang are more active than women in West Java in a way of striving their role or making something for the society, especially when disaster happened. The lecture of mine also said the same thing. Based on her field research she did, she concluded the same thing as the view I outlined. Does anybody know why?

Government intervention is so much substantial to boost women participation. Government can actually make all of its instruments by first considering, involving and planning the role of women. For the budgeting as an example, our government has to map the areas where most women or less women live. Many things we can do to enable women to participate in any field they want. But one thing for sure, women can do anything so long they are on “the right track”. What I mean by this is that, women need to be really really smart in deciding whether or not their involvement or action will be beneficial for them and all people around them, especially husband and children (if any).

Women and men are created equal, so there is no need to treat them differently in terms of human right and transcendental relationship. Islam has its own rule in treating both men and women. Yes, Muslim women have to wear veil or cover most part of their body in front of public, men don't. But many people have misconception that this is the limitation prevailed to Muslim women. I think they who think this are wrong. Islam does not limit them, but protect them. Islam places women in the high place so that they have to be kept, protected and guided, so that they won't fall and be broken. We men love women – our mother, sisters and wives that is why we don't want them to be treated bad by other people. We men are willing to sacrifice for women so that we don't want them work or study too hard. Men and women just have different role. Not because of men is stronger than women we see more men in politics, business or wherever, (except in household). Again, it is all just the segregation of role so that we can live in harmony, stay alive in beautiful tone. If any of you readers are feminism? I am sorry as I can hardly understand what you are fighting for? Physically we are dissimilar, that is why we have to complete to each other, that is why we have different role in life. And how is polygamy? Hm....there's many views on this, I cannot explain in this brief explanation.

This writing is not definitely enough to talk everything I had on my mind about my research and women. It's kind of documentation that will remind me about my small work. Hope I (and you all) can take lesson from this, hope we can improve our lives, always.
Many thanks.

“If any of you readers are feminism? I am sorry as I can hardly understand what you are fighting for? “

ur question reminds me of a critical woman celeb who was born in Garut. I guess she, as one of feminists, does answers ur question. She radically says (more or less) in her book,
“Kalau kamu bertemu Tuhan,
Tolong tanyakan padanya, apakah Adam diciptakan untuk memperkosa Hawa? ” (Rieke Diah Pitaloka)
(i've got d book if u want to see),

Feminists are fighting for something from God that they think unfair, therefore they feel necessary to question such thing to God..even with a sharply impolite words, astaghfirullah.
They're fighting for many things happened to women whom they suppose hav been cruelly treated by men (they forget bout how many men who treat n serve women very-very well).
You know, however, some of them just don't know what they are actually fighting for, they understand nothing, they just join n follow feminism n become RIDICULOUS followers, they ridiculously feel it's cool or something intellectual!But if u ask a lot of woman's movements/organizations, they do have, perhaps more than one thousand reasons behind their fighting.
But, clear, they are fighting for so many things they are PHOBIC about, which are actually not necessary to b fought for, all just make them tired by themselves. They fight frequently in d name of God, Adam, Hawa, religion, human right (n i don't know what else..) n say that they speak for women, in fact we, women, are just fine.

SOOO, in this modern era, women who still think such way are not modern, n men who still treat women improperly are primitive..hehehe