Pictures in this post are the shots called “gerhana-venus” or Venus occultation. Gerhana—venus happens when the earth, the moon and Venus are positioned linearly. This very scare occurrence only happens very rarely. The shots I have here were taken on May 16, 2010 at around 7 pm in the evening. I got these pictures by using a freeware yet powerful program called Stellarium in my computer. 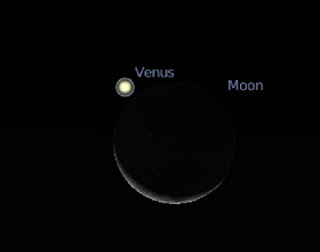 We, people in around 70 cities in Indonesia could actually see the happening with our naked eyes. Unluckily I didn't see the this as I had somehow to do another thing. It doesn't matter though since I could utilize the program that helps me explore the universe, constellation, see stars, planet and so forth. Thanks so much to the Stellarium developer. We can also see this by using other software, one of them is Stargazer. I used this when I was in the USA. What not a fortune that I deleted it when I tried installing my notebook.

I love gazing at the night sky, observing the creation of God's might. It first happened when I was studying astronomy at the UofA around 2 years ago. The lecturer taught me this subject superbly so that I couldn't stop admiring Astronomy, I admired God the most though hehe....

Well, the first picture above is when the occultation was about to happen. The Venus (small one) looks like a star behind the moon. The story goes that the “symbol” of Islam which is crescent and the stars are derived from this natural happening. What we see in this symbol isn't actually the star, instead it is the Venus. I don't know more about this though, I just got it somewhere on the net. Further probing is necessary, ladies and gentlemen.

The second picture bellow is when the Venus was completely behind the moon so that the glowing of it could not be seen. We only could see the crescent moon instead. 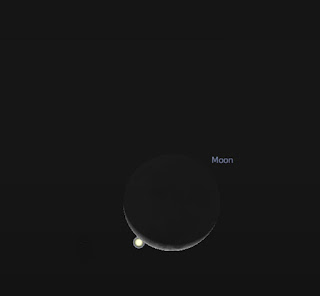 The third screen-shot bellow is the picture when Venus could be seen again. This appearance signs that this occultation ends. This occultation happened for about one hour. 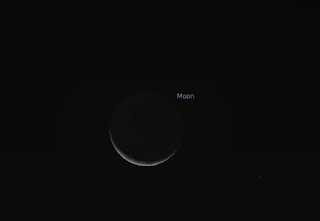 I so much interested in this phenomenon, I don't really expert in science though. I just love it, stargazing is all about fun and Allah's might, these what I have on my mind. Islam really highlights science since everything that Allah created can be measured and studied, science is the fact of Allah's might.