One Day with Pals 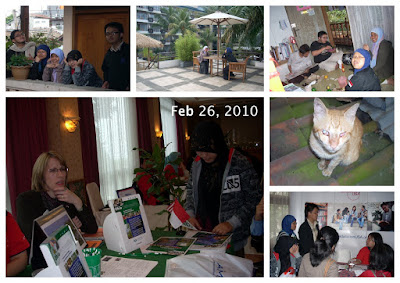 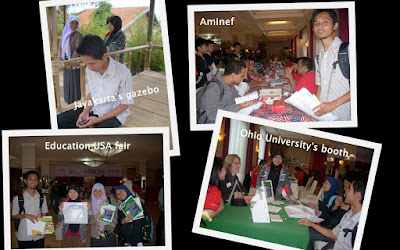 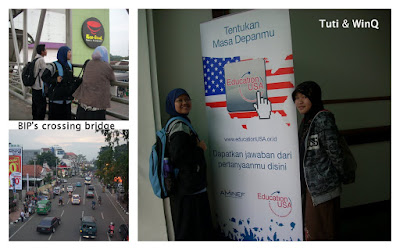 Bismillah,
Hello there, now I'd like to share with you all the story of my life on Feb 26, 2010. It might be not that necessary or so exceptional that I'd like to share with the world. I just feel it's a great experience to have this kind of sweet and fun time with some best friends of mine. As I mentioned in the last posting, Feb 26 (Rabiul Awal 12th) is the birthday of Prophet Muhammad (pbuh) or it's called Maulud/Mawlid (you may read previous posting to know more about it). On that day, we Indonesians had holiday as the majority here is Muslim. Moreover, it's a pretty long holiday as in this year, the following days after that day are Saturday and Sunday. So nice to have these holidays, respectively.

Well, I actually just simply want to share good things I experienced and I hope you can take lessons from those, or you may take valuable information which of course I'm more than welcome if you can find any. This sort of writing is also the appreciation for some friends of mine (in the picture) who badly requested me to post their faces here on my blog haha….kidding.

As usual, on that day I also started my day by doing regular activities - praying, taking a bath, having breakfast and doing some chores. Subsequently, I headed my friend's dorm to practice TOEFL. There were 6 persons came then – Tuti, Sity, WinQ, Ikah (host), Ayib and of course me. We practiced it for about 2 hours. Just Men then went to the mosque to perform Friday praying. I went to Daarut Tauhiid mosque which is relatively near to my friend's lodging house. The imam told us ma'mum the importance of Maulud day. He also gave several examples of those who didn’t apply Islamic values in their daily activities. We Muslims have to totally apply Islamic rules and teachings not just when we are praying but also when we are socializing with society. That is the hard point to do since we are inclined to sort of forget it, aren’t we? Well, by commemorating the birthday of Prophet Muhammad we are able to trace back his exceptional struggle in many fields of life so that we can then take example. Our prophet is the perfect figure of such a multi-talented person; a businessman, a leader, a husband, a teacher, a father, a military expert, a thinker, a giver and everything. It is therefore we’d better start figuring him if we want to get Allah’s bless. That is more or less what I got from the Friday sermon.

After doing Friday prayer, I went back to the dorm and had lunch with the pals, we ate rice and some snacks then. Well, there was also a blind cat at my friend’s dorm and it was really pity, you may see in the picture above. I wonder it can still alive without eyes, praises to Allah the almighty who takes care of everything. Whatever it looks like, that cat also praises Allah, we just don't understand.

Having had lunch, we then decided to go to Jayakarta hotel as there was Education USA fair in which some universities from USA participated. I went there with Dicky by riding motorbike and the ladies went there by using angkot (public transportation). We arrived at the hotel at 3 P.M. What a surprising thing was that we met the representative from Ohio University in which one of us, WinQ is going to go there in April. We then a bit chatted with Mrs. Vicky (the rep) and that was so nice for us. The rep as in the second picture above (4th) was totally friendly and looked professional, indeed she was a pro.

Not just from Ohio, there were also reps from Aminef, IIEF and other universities but I just didn’t really know them. There were about 200 comers inside the hall. Having visited some of the booths, we then headed the seminar room where the seminar had been already begun. The speaker in the seminar was an alumnus from one of the universities in the USA. He gave us a quite clear and concise explanation on how to apply, get financial aid and all. Thanks sir!

Asyar time! We firstly were quite unsure about finding the praying room in the hotel, we then asked a doorwoman and what a luck she showed us the place. It wasn’t really far from the seminar room, about 30 meters. We then in turn did pray there, we also took several snapshots (as you can see in picture 1 and 2). The hotel is quite nice with the swimming pools inside and some gazebos for us to relax or to have a chat. I assume the price at Jayakarta hotel is quite expensive, around IDR 500 thousands - 1 million per night, I am not really sure though. Of course we didn’t stay there as we were not guests, still we could use the hotel facilities though :).

That event had not end yet when we finished doing asyar prayer. We just headed down the town as the day was quite cloudy; it was not because weather anyways. We just felt tired and then came to a decision to go home. Angkot was then the only transportation we picked, you know why? You know the answer :).

On angkot we planned to go to book store, and indeed we did that. We went to Gramedia book store at Merdeka Street. Guess again, what kind of book we bought? None, we just read and read, what bunch of window shoppers right?

One of the interesting things at Merdeka Street is that the crossing bridge which connects the two most visited places in Bandung – Bandung Indah Plaza and Gramedia book store (you can see the bridge in the picture 3). Many people don't choose to use this bridge; instead many of them just cross the street, ON the street ladies and gentlemen. WinQ, one of us then also told us that we’d better not to use the bridge. She said it was rather tiring or somewhat strange to do that, “look! Other people also cross on the street”, she remarked. Well, I told her that it is a must for us, educated persons to obey the rule. It is not that burdening to obey that simple rule, is it? She apparently digested and figured out my saying then. We then chose to cross using the bridge. In fact we could also take some snapshots and enjoyed the view from above. Nice isn’t it?

Having read and peered some books, Magrib adzan was resounded, we didn’t hear that though. We then went to find a praying room. As the tiny and small mushala at the bookstore was quite crowded, we then looked for another alternative to pray. The mosque at Tax Office was the chosen one then. We prayed magrib there and it was a good place for sure. The mosque is located beside the BEC building (Bandung Electronic Center) and it can be accessed by visitors of BIP, BEC and Gramedia book store. During the day it is publicly opened fo all but in the night I don't know for sure. We’d better ask first the officer whether or not we are allowed to go inside the mosque. But we didn’t ask permission as I was quite sure that we wouldn’t be barred from praying at the mosque. Thanks God we finally could use the mosque.

After having Magrib prayer, we went on to continue our trip to our final destination home), again by using Angkot ladies and gentlemen. On angkot we chatted along the way and unconsciously we were at Setiabudhi Street. We then said goodbye toward each other and one by one stepped down from the angkot. I was the last one moved down from it as I live near to the angkot's terminal. In total, most of us spent around IDR 15 thousands for the fares on that day. That day was such an exhausting yet impressing day. We all together enjoyed the outing; we all chatted, ate, prayed and had fun. Thanks so much to all who became my fillers on the birthday of prophet Muhammad – Dicky, Ikah, WinQ, Tuti, Ayib & Siti (missed the hotel trip though), Dede who phoned me when I was at Jayakarta). May that day will remind us about the greatness of Allah, may Allah's bless and love will be granted to all of us, may we can always be grateful for all the things we had, we have and we will have. Many thanks buddies, Allah be with you. Wassalamualaikum ^_^.

Wuaaahh...
A nicely-written recount:-)
You narrated the wholes, nothing's missed!
I've got four lessons from your writing:
1. The more people the merrier, surely.
2. We can do a lot of valuable things on holiday, if we want.
3. We can pray 5 times a day in 5 different places, if we want!
4. We can enjoy hotel facilities for free, if we want..lol

Let's look forward to having another great time, next time.
We experience, then you write.
We have some pics, then you post!hehe
We are glad, we are grateful.
May Allah take care of us, at all times.