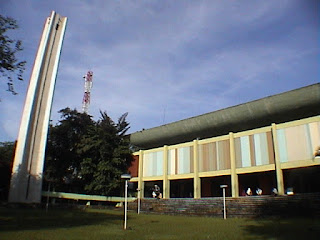 Bismillah
It's not the first time to here, yes; I am here at the open veranda of a mosque where so many scholars in this country at least had ever prayed or done something related to Islamic teachings here. Masjid Salman is the place where I am typing this writing. Salman is the mosque belongs to one of the finest universities in Indonesia - ITB.
ITB (Bandung Institute of Technology) is the most advanced university in technological field. It's like the Indonesia's MIT (Massachusetts Institute of Technology) in which most of the ministries and entrepreneurs in Indonesia produced. Salman and ITB cannot be separated though the location of Salman mosque is located across the ITB complex. There are around 10 thousands of college students and staff at ITB and about 70 percent of them are Muslims, Many students flock at Salman whenever the praying time comes. Besides, Salman also has such thought-proving activities that many of college students from other campuses tempted to join. Many friends and seniors of mine have ever been here as they said Salman is much better that the Mosque we've got – Islamic Center of UPI. I don't really agree with that though as for some cases my campus is better than Salman, it's all yours to decide then.

Well, Salman also has kind of Islamic bank (BPRS) where we can do saving, getting loan, and doing any other economy transactions. The existence of Small Islamic bank around Salman is a symbol of the advancement in terms of doing economy based on Sharia principle. I am somewhat jealous with it since the Mosque at my campus doesn't have it yet. Aside from Islamic bank, Salman also has shop where we can buy any kind of stuff we need, it's like supermarket we often see. The supermarket sells stationeries, snacks, souvenirs, books etc. Something that interests me is that the presence of special market out of the building where the sellers usually sell books with discount, this day they aren't here though as the days always rain. Some of my friends who involve in Sharia Economics Study organization had several times opened the market which used gold and silver money for its payment. It means between buyer and seller there's exchange of products and gold or silver. Gold money (dinar) and silver money (dirham) were universally used during the era of Islamic glory long time ago (and of course during Prophet Muhammad governance). Since that method was not really common in this century, the market which was held at Salman utilizing dinar and dirham attracted ample of people to come, that's what my friend told me. I totally agree with that even though only small percentage of us would be eager to use both of dinar and dirham for our transaction. In other words, we prefer to use paper money instead of gold or silver money. But I think it's great idea if we try to use these payment tools as they were proven more effective from crisis or economy turbulence. If gold and silver are used, we won't depend on US dollar, Euro or anything so much. We'd better consider using them anyways, what do you think? 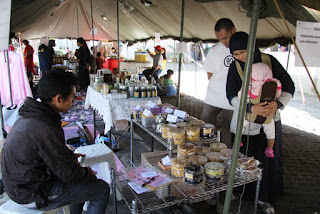 Honestly, I start loving this place as it has attractiveness and I hope I can visit this place in a regular basis for the days to come. Though I was not the student of ITB, I am really proud of having this place in the city of Bandung. As Daarut Tauhiid’s Mosque where I frequently visit, Salman also gives tinges to the movement of Islam’s spread. One of the differences here is that the speech delivered isn’t merely about Islamic values but also about science, technology, social, economy and many more. You’d better visit this mosque if you have never been here. Asides from the desirable aspects mentioned above, you may also feel the fresh air as the mosque is surrounded by trees. Or if you want to mount a horse you don’t need to go to New Zealand, it’s also available near Salman mosque, just pay some money and you’ll be able to ride it for some minutes, if not hours ^_^. In short, I love this place and I hope I can be here again. Thank you for reading.