Birthday of #1 Person in the entire Universe! 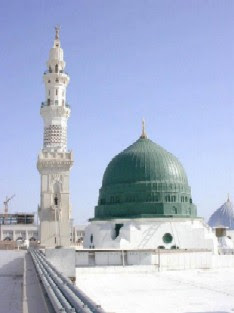 Dear blessed visitors,
Tomorrow is 26th of February, there's nothing special, isn't there? Yes if we use Gregorian calendar it's totally true that tomorrow means almost nothing, just an ordinary day. But if we take a look Hijra calendar instead, tomorrow is 12th of Rabiul Awal. There's must be something on that day, right? Yes tomorrow is a quite special day for me and of course for all Muslims. It's the birthday of our beloved prophet Muhammad(peace be upon him). It's so familiar to us and it's called Maulud of our prophet (the name may vary depending on what language we use).
Maulud simply means the birthday in Arabic language. It's not an obligatory to commemorate his birthday though as he never commanded or urged us his follower to do so, the companions of him didn't do that either. The commemoration of prophet Muhammad's birthday was firstly conducted during the Islamic glorious ages – the middle ages, around 8-11th century if I am not wrong. It's somewhat attention-grabbing to discuss this topic since this is a debatable area, I'd say. I mean there are some Islamic “sects” which do that and some do not. It's not ever so crucial though as this is not a sunnah or obligation that we've gotta submissively obey it. The main point is that we have to take lessons from this commemoration, what are they? Hang five there!

Long time ago, some of Islam prominent figures initiated to date some of the important events to unite Muslims whole over the earth, one of them was our prophet's birthday on 12th of Rabiul Awal. By doing so, they also intent to remind all of Muslims the importance of keeping the track of our prophet's life. Where on earth can we find the meticulously bequeathed story life except Muhammad's story? Indeed, everything about him is recorded, studied, taught and disseminated so that everyone on earth can know it, we know it as Hadith or Sunnah, don't we? Ever since, it became then quite popular among nations, some nations do particular event to celebrate the Maulud, celebration in Islam is okay so long it's done in proper way based on Sharia law.

In Indonesia, we have our very own way to do so, not all of people celebrate it though (due the different view point as I mentioned above). Javanese Muslims (in Central and East Java) tend to have more lively event than any other regions in the nation, what I know, Jogjakarta's citizen in Central Java province have Sekaten which means the a ritual to commemorate this day. At Sekaten, there's an uproarious and interesting event in which many people snatch away something which is carried by particular people from one place to another place. That's like a huge cone formed by several things. The things being pursued formed the cone are food, produces, beads and so forth. It's believed that if someone can take one or some of those things, he or she will be given bless and mercy by God, I don't really understand about it though, for more info about it please do search on Google then.

In my region (West Java), either in Bandung or Garut, I think there's no kind of thing to commemorate Muhammad's birthday. It might be existed in several places in West Java, but I can't make any certain as I've never seen or experienced that directly except in Garut and Bandung. In Garut, we usually make sermon at night and some people are invited to join. In Sundanese (my mother language) this event is called “Muludan” which derives from “Milad” in Arabic. In Muludan, we usually listen to the speech delivered by well-known person in the village of mine. Or sometimes we have quite popular preacher from out of town. The theme talked usually about the history of prophet Muhammad's struggle to spread the beauty of Islam as it will definitely remind us his strive, perseverance, and all his good things. Following the urgency to fully follow his action as it what we are supposed to do as good Muslims, there's some of our prophet's actions we should not have to follow though, exampling riding camel at war, eating dates instead of rice etc. We also kind of chant the shalawat (prayer) for our prophet before the day, several days ago I herd that resounded from mosques around my place. Some of us might hold nasheed contest, quran recitation contest, adzan contest and so fort. Children are always stoked to those.

My mom called me yesterday, she told me that Muludan in my village has been conducted before tonight, it's not really matter though as the essence is not the exact time but something behind it. She did not talk a lot as she was about go then. Even so, I could catch the point she'd say. Though the topic is pretty similar, it's often worth it though as we also often forget about topic in Muludan sermon. I mean it's really important to know and always remember our prophet. The commemoration of his birthday is the best moment. The extravagant celebration is not really wise for us to do as Allah does not like it. Everything must be in mediocre and focused on the goal to just keep closer to Allah, I am ashamed as I can't do the best yet to learn about the story of our prophet. I hope this event is kind of milestone for me to be better know him. Let's make a specific target we want to reach through this commemoration, I think I'm going to buy the Shirah Nabawiyah book and I luckily have downloaded some e-books from Internet, what about you?
Hope you can find this writing useful, thank you so much.