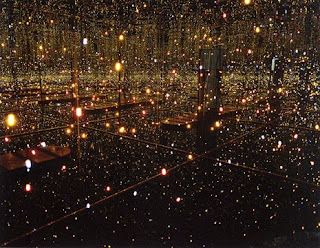 Beautiful, enchanting, glimmering and so cool. These are all I've got on my mind about the fireflies or lightning bugs (in Bahasa they are called kunang-kunang). Firefly is an animal that can light up its surrounding while it is flying in the air or perching on surface of something. Wikipedia says, “fireflies use light of bioluminescence to attract mates or prey. Fireflies produce a "cold light", with no infrared or ultraviolet frequencies. This chemically-produced light from the lower abdomen, may be yellow, green, or pale red”. Great, aren't they? Subhanallah.

Few days ago I listened to a sermon on MQ FM radio delivered by ustadz Budi Prayitno and he talked about this sort of amazing animals. He said that we are now barely can find these animals since things have apparently changed a lot in our environment. It is true that when I was kid and lived at my hometown, I often saw these school of animals if I went out at the dark night. Back then either by feet or by driving bicycle of mine, I used to go to mosque or somebody's house in the evening to learn reading Al-Quran (ngaji). And when I went home, I sometimes found this miraculous animals. I loved them.

Presently, fireflies are somewhat vanished in the big city such as Bandung or Jakarta, and I think so in my small village – Cisewu. I cannot figure out why it's so hard to find or encounter them now. One thing for sure, it's probably because we are now overwhelmingly using light for anything. We set many bulb lamps inside and outside of our house. We also put the street lamps so that they cannot show themselves out even at night. Whereas, it's so bewitching when we are walking on the street or dike between rice field and then see fireflies that shine our path. Extremely miss them.... :(.

Well, I think fireflies are so popular in the society as there are few animals that can glow, firefly is one of them. In Malaysia, firefly is called “kelap-kelip” and in Sundanese (my mother language) it's called “cika-cika” which more or less means blinking or flashing. Due to it's uniqueness, many people use the name firefly for anything they intend to do so. In Malaysia, firefly is the name of Malaysia's first community airline, flying from Penang and Subang to exclusive destinations in Malaysia, Thailand and Indonesia. In the USA, Firefly is an American space western television series created by writer and director Joss Whedo. In Indonesia there is also an old song sang by Ernie DJohan entitled “Kunang-kunang” which means firefly and you can find it on youtube, I am sure :).

Readers, indeed firefly is one of Allah beautiful creature that we have to thank Him for it. I almost forget this animals since I rare to see them for years and years. I cannot find them here in Bandung, I cannot find them at the Zoo or somewhere else. I just miss them and I hope I can someday see it again, wherever it is. Thank You Allah for the beautiful kunang-kunang, thank You for anything.