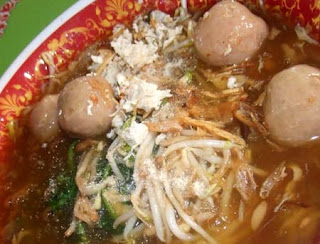 Ni hao, today I went to place (still in my city) to meet somebody which is great. He has enormously good intention in sharing anything he has got to the society. We talked about something interesting for about three hours then. Well, I won't talk about him or his goodness now. Instead, I'd like to share with you about the experience I had few minutes after I parted with that person. It is when I ate something for my lunch – luncheon story.

Soon after our valediction (with that kind person), I headed to a mosque next to his house to perform Dzuhur prayer. The mosque was quite nice and chores of junior high school students flocked inside. I was quite dizzy as because I was somewhat hungry or so. Then I decided to find something for me to eat. Since I was not really familiar with the surrounding, I went by to a high way and finally I found a vendor beside a street (I forgot the street's name though). On the windowpane that vendor's cart written “lomie”. Anybody know what does this mean? Yes it is something like noodle with sticky gravy (mie means noodle in Indonesian). It also has meatball, onion, vegetables, cucumber (optional) and other ingredients. Since I didn't have any audacity to ask the price (I was also quite tired to ask), I just ask them to give me one portion. The waiter said “OK”. And you know what, the price was quite steep for me whose income hasn't grown up :). It costs IDR 15.000 for just 1 cup of chicken noodle while the normal price is just around IDR 5.000-10.000. It didn't matter me as it was quite tasteful -really mouth-watering actually.

While I was waiting for the noodle to be served, some other costumers came and talked one another. What a surprising one was that most of them were Chinese. Yes there were about 5 Chinese then and around 2 native Indonesian. I guess they work for the same company since they talked about sort of business or something related to it. Another shocking thing was that they chatted in Sundanese language. It wowed me indeed. I could hardly believe that they talked as fluent as me. I also wonder why are so many Chinese in my city. I didn't say that I am displeased for it. I just question myself by this. Well, I was also very much sure that Chinese and its inherit are quite ubiquitous in Indonesia, not just in this country anyways- whole around the globe. I have also good, nice, gorgeous Chinese friend out there, she was my classmate when I stayed in the US.

The Chinese I met then actually talked in quite coarse way for me the native Sundanese. But I exactly tolerated them since they are not indigenous, instead they or their descents are Chinese who moved and settled here. It indeed tugged me that they speak in my really native language. I more often to speak in Bahasa instead of Sundanese since my environment here in Bandung forces me to do so. I only use Sundanese when I go back home or when I talk with some of my Sundanese-friends. Their accent (the Chinese) was totally like the real Sundanese as they might have been living here for quite awhile. One friend of mine said that Chinese or any ethnics who have been settling in Indonesia for quite long will always attempt to use native language as they want to assimilate to the native. Or they really want to be acknowledged as part of it. I think both notions can be true or at least both of them are related toward each other.

Readers, I don't mean to humiliate or to disparage any ethnic by my writing. I just want to make two points here:
First, let's live harmoniously with any kind of ethnics in the country. We've got to respect to each other since we are equal before God. Thing that matters is that our good deeds to God and human. Therefore we can never be allowed to make any bad prejudice to all, instead, let's keep improving ourselves, let's keep respecting one another, insya Allah we'll get Allah's mercy and love.
Second, it is good to learn from them (Chinese or any other ethnics in our country) since it's true that most of them more successful in business, it's true that most of them earn much more money than we do. What makes them so then? It's because they work harder and think smarter. Let's copy their spirit and paste it within ourselves, it might be hard to do it though. But I think we can start talking to them and ask them about business or anything. In other words, let's be good to them like what we do to other natives Indonesian. If we have known them better, we can understand them and also take the good things from them.

Third, be proud of speaking our own mother language (Sundanese). Yes, I am not a really good guy of being rare to use it. I promise myself to use the good Sundanese from now on. I know I cannot use it to all people, at least I can do speak it when I buy something from vendors on the street or when I meet those who I know as Sundanese people.

Thank you all for reading, any comment is welcome. Hatur nuhun sareng xie xie ni :)