RAIN, love it or hate it? 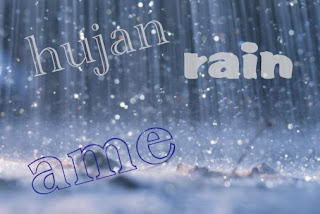 My geography teacher told me that Indonesia has two seasons, dry and rainy. And now it's rainy season in the country. In Bandung lately, ample of rains fall everyday mainly from midday until early night. Some of us might feel uncomfortable with the wet road or puddle of water everywhere. We always think that it thwarts us to work, study, shop just go somewhere. In other words, we sometimes blame the day why it should be rainy when ahead we have bunch of activities to do. Do we blame God who makes rain for us? Ah...I hope you won't think so even though admitting it is quite right as we often think so, don't we? Well, it is just my presumption anyways, may Allah forgive me :).

Rains aren't just drops of water which fall from the high sky. What we see maybe just that's all, but the process isn't that simple anyways, yet, it is really complicated and sophisticated enough for us to figure all out. I'm going to describe a little here. First, water either from the surface of land (such as ponds, lakes etc) or ocean is evaporated by the sunlight. The evaporated water then flies to higher level and lower temperature, it is higher than the mountain and it often reach the atmosphere of the earth. Water blown by wind then form cloud in the sky – it is being condensed to to be crystals. Since the number of water is getting bigger and its position is also higher, while at the same time the power of wind is getting weaker, so the water then falls to the earth. It then waters ponds, lake, ocean, roof and everything and we know it as rain. Complicated isn't it? Well, even so however, we seldom think that the process is that meticulously calculated. We pretty much think like a kid who knows only the skin of everything, I mean we are rarely think that deep, again, it's my un-based prejudice anyways ^_^. In Al Qur'an surah Annur : 43 and Ar Rum: 48 we can see the explanation about the rain and its process clearly. It is therefore there's no point for not to thank God for the rain He gives, praises to Allah.

When I was a kid, I used to play in the rain as I thought that was damn cool and exciting, I relished that. I usually just ran and sang song or even swam on the pool (it's more apt to be called pond) after I played football with friends of mine. Yes I loved playing football then, it's just after junior high I quited playing it for some reasons which I can't tell you here, not a big deal anyway. Well, my memory about rain is also about Indian movie. On TV I often saw beautiful actress sang and danced with the guy in the rain, it was somehow romantic I would say. I used to loved watching Bollywood movies too, it was because no other programs to watch then ha ha...^_^.

As I lived in the area of mountain ranges, landslide often happened during rainy season. It often blocked people who were going to someplace. Thanks God as it was eventually often solved by people who cared about helping others, government officers also often took part in dealing with this issue by deploying and utilizing heavy equipments on the spot. Regardless to its bad impact, rain in fact always gives us tons of benefits. It grows plantation, waters the rice field, generates turbine, keeps the temperature and humidity and does many things. We can never count Allah's bless from the rain, again, praises to Allah.
Okay, you may say that human can also make rain, we know it as artificial rain. It's being conducted when human want to water the dried land. We make artificial rain by doing some sort of things as we can no longer survive from the drought. In Islam we know the prayer to ask for rain (istisqa). It basically means that we have to ask God when we wish for something, this ritual shows our effort and seriousness of wanting the rain. Human also sometimes do ritual to “block” rain from coming as they have important event such as football match, wedding party etc. I have no idea about this as I never heard it in Islam, I can say that it is just human effort to control rain, not to make it. Frankly I'm not really agree with this as we might ignite Allah's curse by doing so, what do you think? Wallahualam. Still, we can never make any certain whether or not the rain will happen, only God knows.

Last words, let's keep thanking God for anything. It is Allah's right to give or give not us rain. Be sure that the rain happens is in Allah's best decision for all of us. What we need to do is that preparing anything to cope it – bringing umbrella anywhere we go is might better to do. If you are a motorbike driver, please bring rain coat and boat with you as they will be very useful in this rainy season.

Many thanks for reading :)

Feel warm when rain comes but it's over when thunderbolt dances around!