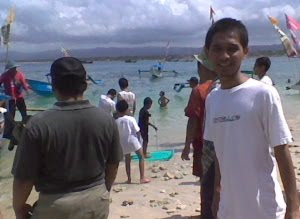 On Thursday September 24, 2009 I and my family went on vacation to Pangandaran beach. We actually headed there a day before and arrived at the rented-house at 11 p.m. We rent a house for all family members (24 persons) at the price of 400.000 rupiahs per night, a fair price for 3-bedroom house as at that time being was in Eid Al Fitr holidays. We didn’t choose hotel because obviously it was much more costly and rather hard to find the unoccupied one. My father planned this journey for me his son who had never been to Pangandaran before. As I’ve graduated from university lately and the Eid Al Fitr came, we decided to go there.

The route we chose then was the new one. People who went to Pangandaran long time ago used Cisewu – Garut –Tasik – Ciamis – Pangandaran route and it took about 12 hours. But we took it shorter as the new way was established in 2006. We took the route of Cisewu – Ranca Buaya – Pameungpeuk – Cipatujah – Pangandaran and it took only 8 hours, much better wasn’t it? Besides, the scenery was pretty awesome so we were very much glad taking that road. We could see jungle and rubber tree as well as river and ocean along the way.

Since then was in Lebaran break, the beach was fully crowded by the visitors both domestic and foreigners. The coast of Pangandaran is quite popular in Java island since it has beautiful scenery. Ship transported I went to several spots there and thanks God I didn’t feel seasick although that was the first time boating. Pasir Putih beach (white sand) was the first destination and need to pay 12.500 rupiahs per person to be transported by boat. Only 5 of us went to Pasir Putih beach as the rests were quite afraid of being on a ship, and it’s needed to say that the wave then was quite high up to 1,5 meter. At Pasir Putih, we could do snorkeling and see stunning reef with its fish and sea plantation, since anything should be rented and I had no preparation to dive, I didn’t do that. Instead I and all headed to Hutan Cagar Alam (preserved forest). At the gate, forest police stood up and sold the ticket for entering the forest, we paid 2000 rupiahs per person, pretty cheap right. Along the forest we saw teak tree, rattan and another species of plant.

Aside of those, there were also shoal of apes playing from tree to tree. Oh yeah we aren’t at all allowed to disturb anything there, it means we can never cut the tree, kill the animal as this is counted as crime. Having walked around the forest we went into the cave namely Lanang cave. This cave was used as one of the locations in Misteri Gunung Merapi TV serial. That’s why Lanang cave is more popular as the cave of Mak Lampir. Again, we groped the pocket as we need to pay 1000 rupiahs for sanitary and lighting fare, no matter though. I saw also the some deers which were kind to us. We can feed them by peanut of something, but be sure not to bother them while they were resting or having sexual intercourse, I would say that will make them mad at us, perhaps. Well, if we go there with the kids, they also may try flying fox and some adventurous game around the cave, it is worth to try but I don’t know how much it costs.

Having tried and explore almost all sites, I phoned the ship driver to ship us back to the meeting point with the rest of our family. Again, I sailed on a boat and it was fascinating, really fascinating!!!
Voila! We backed at the house and some of our family had bought some cloths with Pangandaran written on those. As I did want that too, I bought short pants for about 20.000 rupiahs, hm…worth it.
It was 11 a.m we drove back home to Cisewu. On the way home, my dad offered me to pay a visit to Grand Canyon site; wow…I of course accepted that offer since I very much wanted to know the Indonesian GC. Yeah, it took 1 hour to reach GC and you know what, it was written on the welcoming board that the place’s name was Green Canyon, not Grand Canyon; haha….quite funny as I really expected to know Indonesian GC, hm…my dad seemed apparently wrong hearing the name, it was fine though as the scenery was pretty good and it probably same as GC in Arizona. It’s called Green canyon as the river’s water is green. Many people visited this place as they also had passionate like me - wanted to visit Indonesian Grand Canyon ^_^.

We arrived home in Cisewu at 7 p.m. I directly went bed and performed isya prayer beforehand. Hm…what an exhausting journey, it was full of fun though. Thanks God.
Posted by Egi Arvian F at 12:10 PM

The information here is great. I will invite my friends here.