Hello 2018!
It seems I am becoming so lazy to update my blog here. But that’s not totally true anyway. Lately, I focused myself on writing for my publication. I have produced some published articles within this first semester this year. Well, now I am going to tell you all about a city in Indonesia namely Bandar Lampung.

My wife was born and grew up in Bandar Lampung until she moved to Bandung to go to college. I met her in Bandung and we got married. The first time coming to Bandar Lampung was when I proposed her to marry me. Frankly, that was my first time stepping my feet on the land of Sumatera island. So I was quite perplexed by the situation, culture, places and especially the weather. Sure, it feels hotter in Bandar Lampung than it is in Bandung or my hometown, Cisewu-Garut. Time passed by and I have some good foods from this city. Here are some of them:

The first, the fish are the best! Since my wife’s town is located nearby the sea, so the fish are non-compromised. In my 'dark life', I did not eat fish. I thought that all fish are fishy and I hated any of them. Until then my wife persuaded me to taste the fish from the sea (a.k.a seafood). It was so much better than I thought and since then I became the fish lover, especially the fresh fish from the sea. So bad that in Bandung I never found any fresh fish. I mean, they are not as fresh as in Bandar Lampung. Besides, there’re a hundred kinds of fish that do not make me bored to eat. The taste varies and it does not like the beef or chicken, the taste is always the same. My favorite fish so far is Simba fish. I like shrimps, too.

The second is martabak of Lampung. What I mean by this is the only martabak sold nearby my parent in law’s house. The martabak does not have any brand as the seller does not intend to make it popular or something. The seller (and also the maker) is a Chinese, but he does not act like the common Chinese that I am familiar with. He is not a hard worker in a sense that he does not open his vendor or store every day. His store is located at Gudang Lelang fish market area and he opens only in the morning (from around 6 to 11 am). He tells us that he would close the store if he watched the football match in the previous night. He said that selling martabak two days is enough to earn money for sufficing his family needs for several days. As a consequence, I didn’t always see his store open whenever I went to Bandar Lampung. And you know what? He has been making martabak for more than 35 years and he does it by himself! Don’t ask me about his skill in producing the marvelous martabak, he’s the professor in it! The taste? You will never find it anywhere else, guaranteed. I took a picture of the martabak as shown here: 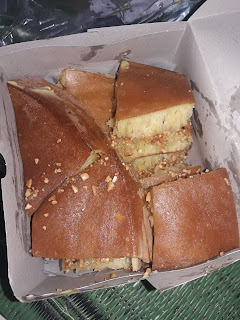 The third one is Bakso Sonhaji Sony (known as Bakso Sony). Sorry as I mention a brand, but I have to be honest that the meatball is so good. This afternoon we went there and it was so crowded of people. We waited for almost 40 minutes before we had our meatball served. And to get it, I had to argue little bit with the servants as they seemed too busy serving the customers. If I didn’t act that way, maybe I would wait until one hour or more to eat. To me, the good thing about this meatball is the texture of the meatball. It consists of real beef and you can easily taste it from the fibre in the ball. Besides, the soup tastes different because it is made of special ingredients and peculiar spices. Bakso Sonhaji Sony is located on some streets in Bandar Lampung and the one we visited this afternoon was the first store and the largest one. Here it is on the map:

Regrettably, the management of this headquarter store is not really good, meaning that during the peak hour (Saturday and Sunday) we won’t really get the attention of the servants. We eat first and we pay latter to the cashier by mentioning the items we ate. If someone acts like an evil, he would eat the meatball and he just left. He won’t be noticed. But don’t do it, please!
Those are some foods that I liked so much in Bandar Lampung. I hope I can update the list sometime in the future. Share with me if you visit Bandar Lampung.
Thanks