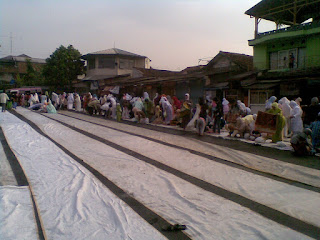 Bismillah,
Allahuakbar...allahuakbar, laailahaillallah...
This chanting was resounding from the dusk of yesterday till this very last morning. The sun shined brightly and the weather was sort of cool. I prepared myself to perform Eid ul Adha prayer at Daarut Tauhiid's mosque. But for some reasonable reasons, I executed a contingency plan – doing prayer at Ledeng area which is of course neared to the home of mine.

The place that we used for praying is actually a bus station situated at Ledeng. It very makes sense since there is no more place to use. I mean the bus station is quite representative and can accommodate up to two thousands or even more people. I assume that the committee of this prayer, in which the DKM (Management) of Nurul Huda mosque did kind of lobbying to the DLLAJ (authorized transportation institution) to use the station. Here are some more shots of the last morning prayer: 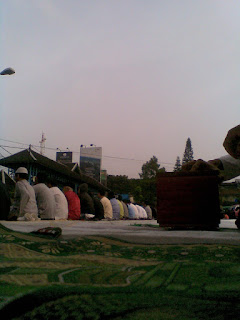 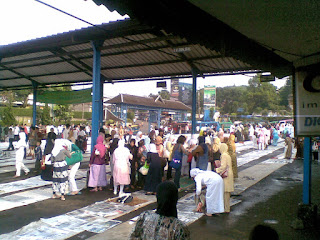 From the speech, noted some points here as follows:
Ibrheem (Abraham) is the father of prophet. Shalawat in our prayer is for Muhammad and also Abraham. He struggled to find God miles away from Mesopotamia, to Egypt and finally to Mecca. He worked hard for the both families (Sity Hazr and Siti Sara). He also built house of Allah in which Ka'bah. We all now from all over the world pray toward that direction as the symbol of unity in Islam.

Abraham did those things to find the real happiness while living in this world, he didn't mere look for the worldly things though. His aim is to sincerely make all people happy. In Mecca there are various foods and fruits from whole over the world and it has been lasting for years and years since Abraham asked it to Allah. I forgot the prayer though, sorry :).

The water of Zam Zam (derives from Egyptian language meaning gathering) that is so popular among the pilgrims is for all human on earth. He even sacrificed the one he loved the most (Ishmael) for the sake of Allah. But Allah then succeeded his son with goat. This thing shows us that killing human can never be right. Aside, loving someone or something to much in this life is not right either. Place everything in moderation!

All rites that Abraham and family did then finally come up to us such as thawaf, jumra, hajj and Qurban. In short, we Muslim need to learn a lot from the prophet Abraham.

So, what can we Indonesian Muslims do now? Well, from the speech I could say that we must work had to create paradise and gladness as best as we can in this life (like what the prophet Abraham did). The country of ours are now being stricken by the attitude degradation thiriving, we act mostly based on lust and anger. Therefore let us create paradise of ours wherever we are, at house, bus station, school and where else. By all means in Qurban we give “heaven” to those who have no opportunity to taste the flesh of animal in their daily dishes. We Muslim, indeed love sharing cheerfulness to all humans on earth, it has been exemplified by Abraham the prophet of Allah, right? Merry Eid brothers and sisters :)