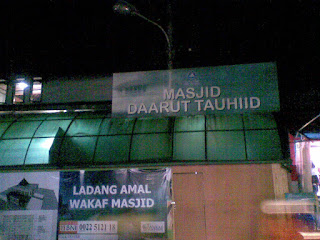 Daarut Tauhiid Mosque is situated at Geger Kalong street, precisely beside the street's line so that it has a quite narrow passage. In the city of Bandung, this Muslim praying place is located in the northern part of the city so you need to cruise up quite a bit if you'd like to reach this spot from the city center. Nor this mosque is really big or grandiose, and yet its fame reaches the entire country or even overseas.


This mosque has now some alterations which bring it to the upper level of mosque in terms of management and some measurements. The mosque is started to be known by public some 10-years ago by an ulama (preacher) namely Abdullah Gymnastiar (Aa Gym). He is somehow an initiator or the pioneer who commenced the mosque establishment, not the owner. Aa Gym is one of the most popular Islamic preachers as his way in delivering Islamic teaching is somehow dissimilar to others. In my personal opinion, he is a breakthrough maker as the atmosphere he creates when preaching lets me go to the place of clear and simple understanding. The material of his teaching is mostly about Tauhiid or the ones of Allah. He pretty much repeats this material as it is indeed the most high thing we need to fully grasp then apply in our life as Muslim. Tauhiid is the estuary of science and understanding of a Muslim.

I admit that in the middle of the going, this Mosque might have been supported by Aa's popularity, but now everything has been much better. The mosque committee is open to the improvement so that the mosque starts running more professionally.

There are some points I am trying to outline regarding to the professionalism of the mosque (of course there are still some weak points needed to be upgraded). First is its facilities such as are clock displaying the rest time before the obligatory praying begins. It is needed for us when we are about to do the additional prayer before the fardu one. I think there are only few mosques in this country do have this kind of facility as the people might have different view on this. Some might think that this is good idea to be conducted as the technology is supposed to make our deeds or worship better. But some people might think that it's not that needed, I have got a friend who thoughts so. It does not matter though as difference gives us little bit nice tinge and dynamics in life, he is still my buddy anyway... :)

The next is a clear audio sound. When imam is reciting the prayer, the voice can be heard quite loudly so that there is nothing missed or overlooked. Next supporting tools are infocus, LCD monitor and TV showing Visual speech delivered by ustadz. Another good point is that its tidiness and sanitary. Though it maybe cannot be compared to as example Al Haram or and Al Madina mosque in Saudi Arabia, Daarut Tauhiid's mosque can be also counted as a quite clean and comfort one in this city (if not in the country). Or maybe I just have not been able to experience being in many mosques in this nation :)

Another thing deserves the consideration is that the quality if imam which most of them are hafidz. Hafidz is a term used to name someone which is able to memorize all verses of Quran. It is for sure a super plus point as there are only few hafidz in this town (compared to the total population). So, DT mosque is somehow far more advance in a way of providing us quality iman in praying. As and addition, to me DT mosque is a quite impressive mosque as it had never few people coming especially for jamaa prayer. The committee always makes events or something to invite people to get there.

Very last point is that the way of committee of the mosque in gathering fund for building and expanding the mosque by empowering wakaf funding from the generous people. There are some unique ways done by them. One of them is that by gathering the money using saroong (a piece of fabric hung on somebody). The people who wear or lift this saroong then move around to collect cash from jamaah (people). I have just found it here, at DT mosque. At the present the mosque is under repairment, so let us make some investment by donating some of our money for the mosque.

Well, by the way have any of you paid a visit or stayed at the mosque? If haven't please do make a visit to pray or anything. You might be able to meet me in weekends there, not a whole day though :)
See you at Daarut Tauhiid's mosque – a mosque where peace and warmth lie within.
Peace be upon you...