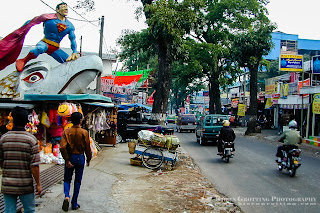 Local election to vote the mayor of Bandung is about to begin. Now there are at least three pairs of candidates competing to get the most votes. All of them started to campaign or disseminate their pictures to ignite the awareness of Bandungnese. I think I am not going to vote as my legal ID card shows that I am a Gartutnese. Nevertheless, I am very much concerned with this election as I have been living here for about seven years and of course I am hoping to be led by good mayor. I plan to continue living here, too.

Referring to my deep concern, I did little research by asking some friends of mine who are native Bandung about what kind of problems they have in Bandung and what kind of leader they wish to be as mayor. Here are some problems felt by Bandungnese (based on my research).

First, we all now are fed up with the traffic jam. Everyday on the street is crowded caused by too many cars and motorcycles. I do ride motorcycle to my workplace and campus, so I admit that contributed to this jam. And yet, I have no more idea about using any alternative since me and every one agree that motorcycle is the most efficient one for the time being. If there is better public transporter I am sure we all will consider to use that instead. Monorail is still in a proposal now, I hope that this will be approved and the construction will soon start. We cannot wait!

The second problem is about demography. There are too many people live here. There are many people come and settle here. Is it a problem? Yes, again I contributed to this issue. But there must be real solution of this increasing number of people. I think that the development of regions around Bandung should be started. In other words, we might prevent people to come to Bandung by doing subtle way such as building vicinity cities. Third problem is illegal street vendors, beggars, illegal cafeterias and unregulated advertisements such as billboards. Don't you think that Bandung now has an overwhelmed amount ads? I am hoping that all of them will be weeded out as the cleanliness and tidiness of this city are much better. Beggars are also the issues in this city. It doesn't mean we have no mercies on them, but still we have to place them in the right places, not on the streets. In facts, some of them can be rich by doing their job asking people from a car to another. There must be really action to take care of those people!

The next problem is flood, broken streets and trashes. One way to solve those problems is to learn from another country such as Malaysia and Singapore. I think it is not really difficult to solve them if we want to really learn hard and implement the result of the learning. Start imitating from others for the sake of the good!

Those are several problems faced by Bandung, the city of Paris Van Java. I am hoping that the next mayor will be really able to overcome the problems and bring this city toward the betterment.
Posted by Egi Arvian F at 9:40 AM