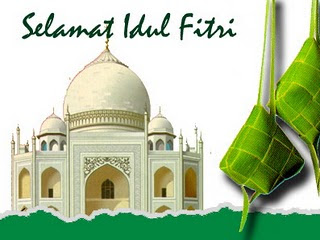 In the name of Allah the most gracious the most beneficent,
Lebaran is a term used by Indonesian Muslims referring to the Eid Ul Fitr. It is one of the holy days commemorated by Muslims whole over the world. The commemoration is basically based on Islamic calendar or the moon calendar (Hijra). It falls every 1st of Syawal (10 month in Islamic calendar). Mind you, this year's lebaran celebrated on different days (based on Gregorian calendar).

Yes, it might just happen here in Indonesia – the largest Muslim country. Some of Muslims had 1st Syawal on Augsut 30th but some, the majority had it on 31st of August. It somehow shows us that Islam in Indonesia is the largest and there are always possibilities for difference view, difference interpretation of something and of course difference understanding or thought. This is a blessing from Allah for us
As long as I know, this kind of difference happens several times in my life. This year, the difference is actually little bit more controversial because since long time ago the government had actually stated the day - it was on 30th of August. But then the government, by the ministry of Religion made a change of the Lebaran after considered some suggestions from several sides such as Astronomers from Boscha Observatory, scientists from LIPI, Islamic organizations (NU, Muhammadiyah, Persis etc). The government's decision finally became 31st of August and this has become a nation-wide stipulation. And yet, government tolerated and protected those who celebrated Eid on 30th of August. There are Muhammadiyah, FPI and some other minority organizations celebrated on that day. I did celebrate Eid on 31st of August since I personally believed in the rule of my government. I believe that I have to follow what Government stipulated because it is what I know from the teaching of my prophet. Following that is supposed to be a part of my worship.
This different might or might not be needed to be eradicated. Well, to me, it might be nicer if we all Muslims in Indonesia have the precise day of Eid. For we will have merrier celebration as more people gather on the same day- having a day of victory. But rejoicing is not the main reason of Eid. This day is actually a milestone to actually apply the result of a-month-training in Ramadan. There is no need to have euphoria by setting fireworks or eating all delicacies served on the day. This what actually happens in the village of mine - Cisewu. We learned how to control ourselves during Ramadan, so when we eat lots of things after Ramadan, it is kind of losing the control and we gain nothing from that training.
Lebaran is indeed fascinating as we are able to gather with family. The difference of celebration can never make someone hate over another or thought someone is better than others. We'd better see this tiny dissimilarity as form of blessing from Allah for us, Indonesian Muslims. There are approximately 200 Muslims living here, so it is undeniable that we have difference day of celebration. All we need to do next is to really apply the result of Ramadan and keep respecting others, both Muslims and non Muslims.
At last, I would like to say merry Eid Ul Fitr to all friends and families whole over the earth. I so much apologize I made to every single of you. We know that none of us is perfect, so let us just ask for forgiveness to each other, right?
Thank you all very much,
Warm regards – Egi Arvian