Salam,
Few days ago, on January 15, 2010, I and almost all of Indonesians who live in the country experienced a quite remarkable and stunning thing. It was the eclipse of sun, readers. This scarce happening is the second time I have ever experienced in my life. As far as I could remember, I first experienced it in 2008 and that was so fascinating that I could see the moon was blocking the sunlight at the daytime. I heard it many times when I was kid anyways, but it was just too hard to recall whether or not I saw the eclipse with my own eyes.

To me, talking about eclipse either solar or lunar eclipse has always been zinging, what about you? I am very much sure you have ever known what is umbra, penumbra and other terms related to these two eclipses. At least you have heard those when you were at elementary school and your teacher taught you about eclipse in the subject of nature science. Still remember about those kinds of things? Hopefully so.

Well, the eclipse of sun happens in day time in which serially, the sun, the moon and the earth are in line. The moon can be said simply passes the sunlight therefore we, who live in the particular areas might feel the day a bit dimmed or even dark. While eclipse of the moon happens in the night in which the sun, the earth and the moon are in a row. These occurrences are totally scarce and the exactly same solar eclipse for example, might happen again in 1000 years to come. It's therefore we've gotta roll the dice if we know there will be an eclipse in several days ahead.

For this solar eclipse, I didn't purposely go to any observatory or campus as frankly to say I little bit forgot about that. In last year solar eclipse I went to an event held by one of the faculties at my campus and luckily the committee gave us brief explanation bout eclipse as well as the preparation we need to do before observing solar eclipse. The committee said that we can never see the eclipse with our own naked eyes, instead, we have to wear particular spectacles made from kind of carbon or black polymeric. This material can hinder ultraviolet and any harmful particle from the sunlight. The price ranges from IDR 10.000 until 30.000 (US$ 1 - 4 ) which is only sold before the eclipse happened.

Something different I did to see the latest Lunar eclipse is that I utilized a computer software namely Stellarium. This software is a freeware and can be installed on windows, Linux and also Mac operating system. Stellarium gives us clear and accurate precision as if the reality. I by myself saw the moon was moving to thwart sun in many modes. Here is the picture: 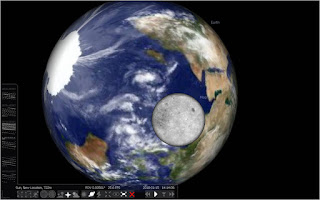 By installing Stellarium on our PC or notebook, we can see constellations, stars, planets and many things. Aside from those, we also can go anywhere else on this earth or in our solar system to explore many sky's object. On that day, I observed the moon's moving from my city (Bandung) and also Jakarta. Here's the sampling picture: 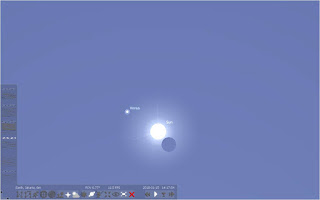 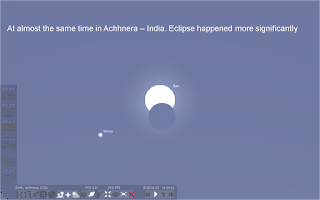 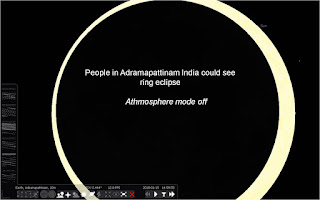 Indeed, an eclipse is a super bona thing on my mind, I only experienced it once in awhile, nothing is great for God though as He is the most great.
A professor at The University of Arizona (whom I contacted recently) told me that he only experienced it 2 times (saw eclipse with his own eyes). In his email to me he said that it was also interesting for him to capture some snapshots of eclipse. I am proud of knowing this event and liking this as it reminds me about the might of Allah, the sustainer, the creator or this universe. Allah is great!

Great Job!
I took the photograph of solar eclipse too by using my pocka (pocket camera)!