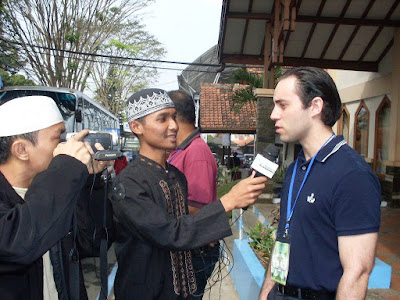 It's such a memorable experience when I became a reporter to interview the guests from Asia and Europe. The event namely ASEM (Asia Europe Meeting). The person I interviewed here is a French, but I forget his name.
This event is held annually and last year (2008) was held in Indonesia. The participants came to Bandung from Europe and Asia to share their understanding about interfaith and religion. Aa Gym is one of the speakers who talked to them, Aa is a strong religion figure in this country so that he was invited to give speech. Aa performed quite well explanation about Islam even though in quite simple English. I realize that the reason I learn English and other languages must be based on the noble intention, yeah it's true, I should learn as many languages as to do dakwah and for the sake of Allah, by mastering in many languages we will be able to explain to many people about the peace and beauty of Islam, insya Allah.